With Veterans Day just around the corner on November 11th, it’s important to remember the men and women of our Armed Forces. That is what artist and sculptor, Lori Betz of Betz Art Foundry in Houston Texas, was chosen to do. She will be creating five sculptures for the Veterans Memorial Park in Tampa, Florida.

Two of the five sculptures are already completed and installed. The Veterans Park is separated into different areas commemorating different campaigns. The first sculpture was for the Iraqi Veterans Memorial area and was centered around the theme of “All gave some. Some gave all.” 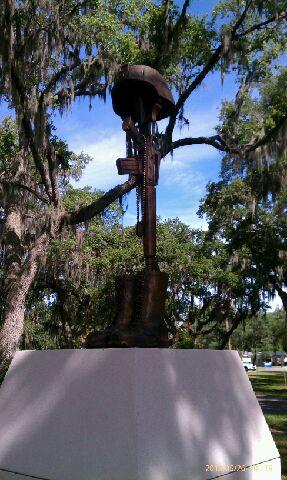 Sculptor Lori Betz created a six foot tall “Battle Cross,” which is an artist’s interpretation of the cross made out upon the battlefield when a soldier dies in action. It is made of a soldier’s boots, gun, helmet and dog tags. On the Memorial, the dog tags hanging from the Battle Cross bear the name of the first fallen soldier in the Iraqi campaign while the other side has the name of the last soldier to fall in this campaign. This monumental sculpture is set upon a seven foot tall cement plinth that has three large bronze reliefs attached to the sides also created by artist, Lori Betz.

The next sculpture that has been commissioned for the Veterans Memorial Park will be for the Committed Forces area. Sculptor Lori Betz commented on the next phase saying, “I submitted a sketch for this sculpture to the committee that I based on the theme I came up with and titled ‘Our Troops Protecting Freedom Around The World.’ It will feature a 5 foot bronze globe of the world set upon a tall cement plinth that will have four figurative sculptures around the base. Each sculpture will represent a different branch of the Armed Forces and I will be choosing models for these sculptures based upon the ethnic diversity of our military forces. I am so honored and proud to be a part of this project.” Betz has also designed miniature versions of the larger sculptures that have been installed. She has donated them to help raise money for the park and also for other Veterans’ Charities. She recently donated one of these maquettes to Help a Hero.org and it sold at auction for four thousand dollars. A hundred percent of that went to build new homes for our returning heroes. “It is a small thing to do when you consider the sacrifices of our military personnel,” said Betz.

Lori Betz creates all of her sculptures in her studio and bronze art foundry in the heart of the downtown Arts District in Houston, Texas. Besides creating monumental commemorative sculptures, the Betz Art Foundry team of artists also creates custom architectural works and fountains for some of the most prestigious homes in Texas. You can see more of her art work and follow along with the creations of other monumental sculptures at betzartfoundry.com

Latest posts by actwd (see all)