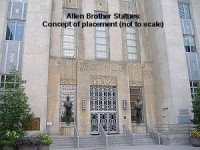 Lori Betz has been chosen create two life-sized sculptures of Augustus Chapman Allenand John Kirby Allen, the co-founders of Houston, that will be placed on the east side of entrance of City Hall.

John Finger, the architect who designed City Hall to honor these to visionaries who in 1836, built a city on the muddy banks of Buffalo Bayou and called it Houston. Finger along with then Houston Mayor, Oscar Holcombe came up with the idea in 1939 and until now remained incomplete.

According to a 1939 news article in the Houston Press, Holcombe announced that because of funding problems the sculptures would have to be scrapped but a space was reserved for each Founder.

In January 2014, Lynna Kay Shuffield proposed to Texas Star Chapter, DRT, that it correct this and start the correct this oversight. Seventy-five years later, the process to raise the funds and complete the project has begun.

Betz has a rich career that spans over 25 years and was the logical choice to complete such an these two important sculptures that will add to the historical fabric of Houston. “This is a true honor to be selected to complete these sculptures that not only honor two great men, but will also mean so much to Houston as a city,” said artist Lori Betz.

The project has been endorsed by the families of AC Allen and JK Allen. The Texas Start Chapter presently has three members of the Allen Family as well as one honorary member and one deceased member of the family.

Any foundations or corporations that wants to set up a grant to assist with this truly historical project may contact the Texas Start Chapter, an IRS 501(c)(3).

Latest posts by actwd (see all)